Why considering Twitch in your digital strategy?

Twitch is likely to become one of the biggest trends in digital marketing over the next few years. In 2020 its development and popularization accelerated. In just 4 months it increased by 200% the number of active channels, reaching more than 4 million content creators.

The application, created in 2011 as a spin-off of justin.tv, has been owned by Amazon since 2014. We could define Twitch as an interactive live streaming platform where content creators broadcast videos for viewers and viewers can interact with the streamer through a chat window. Although at first the application was used to broadcast videogame games, it increasingly covers a wider variety of content such as music, talk shows, sports, etc.

Probably one of the main key factors of the platform is the potential of its community. What is Twitch's audience? The platform currently has 26 million daily active users globally and, therefore, potential buyers.

Twitch's growth is evident and this is demonstrated by the statistics of Business of Apps. Do you want to know other data about the platform?

This diversification of content and its popularization have led brands such as Adidas, Red Bull or Intel to invest in the platform, both in ads and in sponsorships to streamers or gamers' teams. In fact, in 2020 Twitch's advertising revenue reached $750 million.

How does Twitch work?

The platform can be accessed through twitch.tv browser, the app, game consoles, and other platforms such as Amazon TV or Google Chromecast. On it, streamers broadcast free of charge and in real-time through their channels, for both followers and subscribers. Also, they can interact with the audience through chat.

As we have just mentioned, there are two types of users on Twitch: the subscriber and the follower.

On the other hand, the streamer can earn money from affiliate programs, subscriptions to his or her channel, virtual currencies (bits), sales of games or other related items, and advertising. Advertising revenue depends on the CPM and the number of active campaigns the channel has.

Depending on the number of followers and the frequency and quality of their broadcasts, a streamer can become a partner. This allows the content creator to integrate advertising on his or her channel for a maximum duration of 8 minutes. If the streamer does not reach the level of partner, it can become an ally of your brand's influencer marketing campaigns.

You're probably wondering, how do ads work on Twitch? There are 3 types of placements on Twitch that a partner can insert in their streams:

Apart from that, there are six ad formats that you can incorporate into your Twitch advertising campaign: 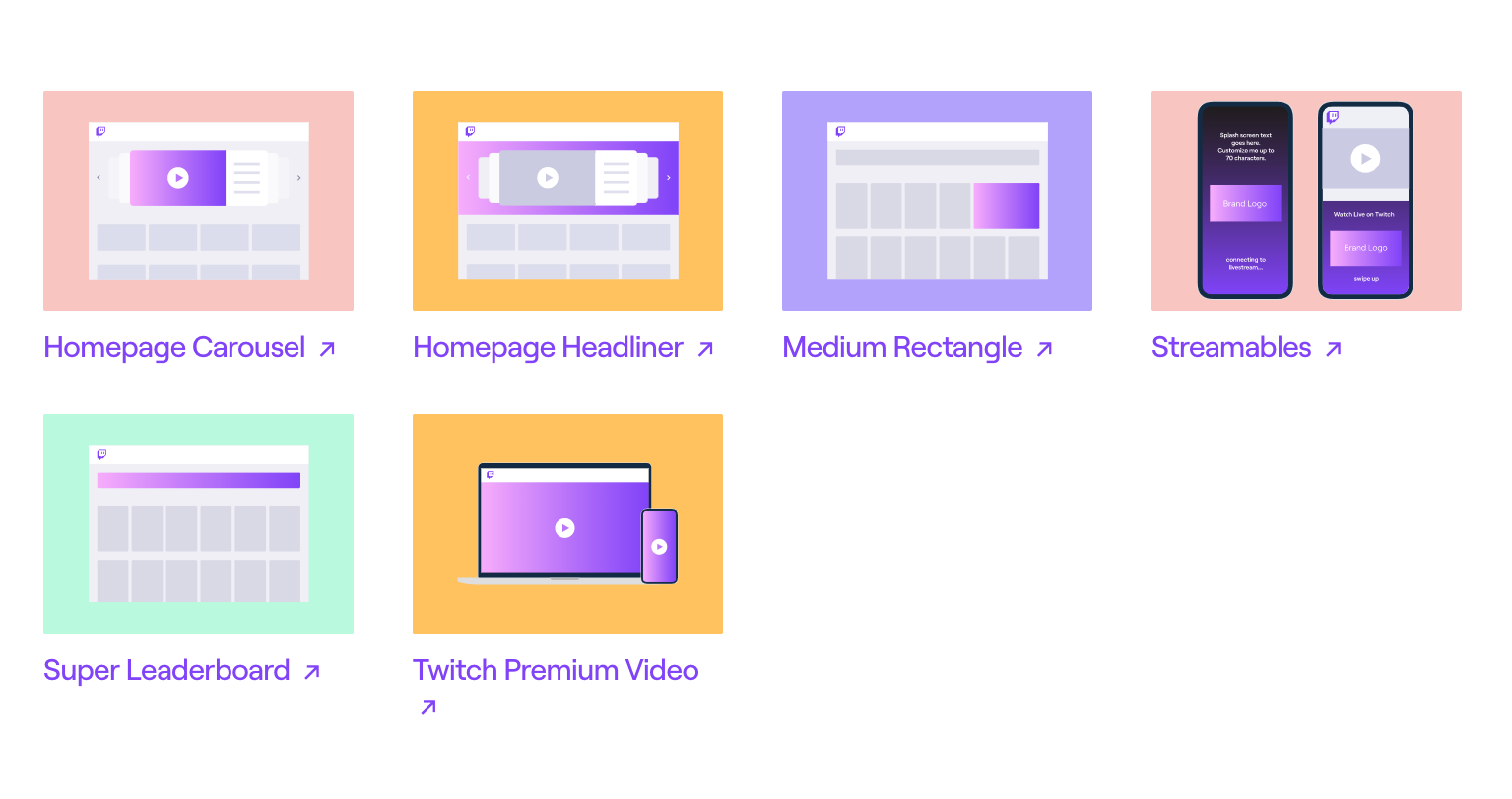 The Homepage Carousel allows you to promote a channel's content in the central part of the Twitch homepage in a rotating carousel where different live streams are promoted. What does this type of ad allow? Drive traffic to a channel, so they are not really ads for brands. The specification for this type of ad:

The Homepage Headliner format allows you to promote in the header of the Twitch homepage next to the most premium content of the platform (Homepage Carousel), we could say that it is the background that appears behind the previous ad format. This format is composed of 3 components: two final images and a hexadecimal color code. The specifications for the images are:

The Medium Rectangle format allows Twitch users to be impacted while exploring the platform's content. In this case, the specifications are: 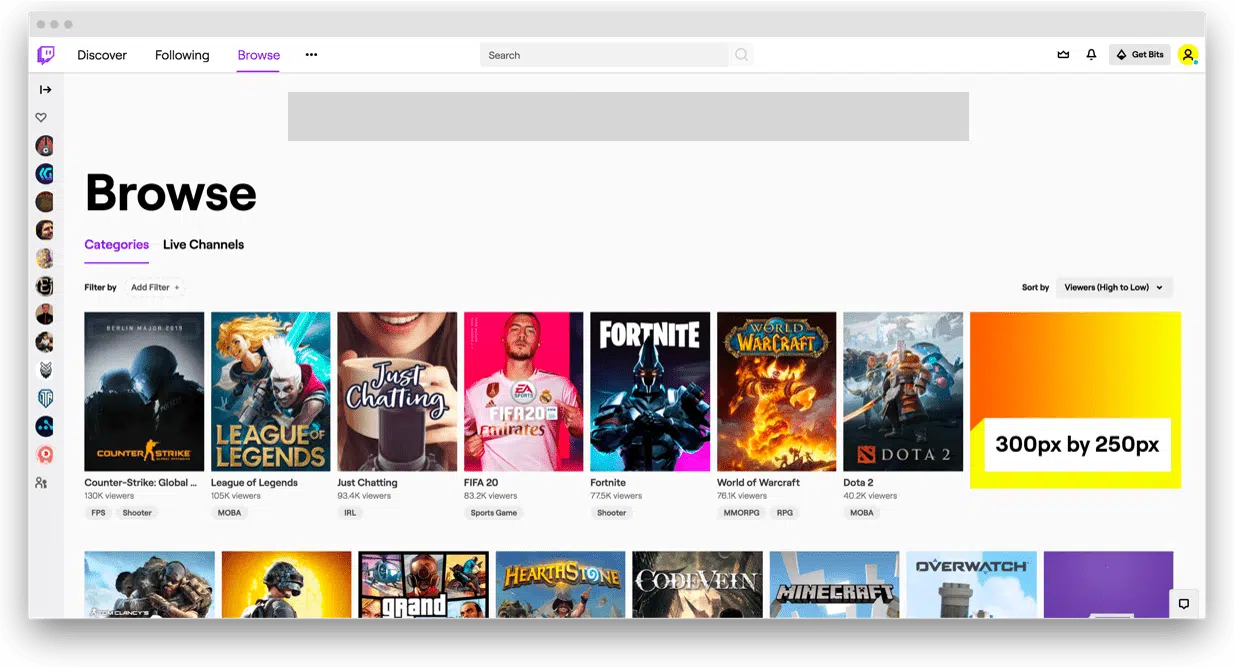 Streambles allow you to expand the audience of a live stream by increasing viewership and viewer engagement. These ads appear in full screen while the user is in a game associated with Twitch through a mobile device. In them, the viewer sees 30 seconds of a live stream and cannot skip it, then can continue watching the stream on Twitch or continue playing.

Similar to the impact of the "Medium Rectangle" format, Super Leaderboard ads keep the user attentive while searching for content. In this case, the specifications are: 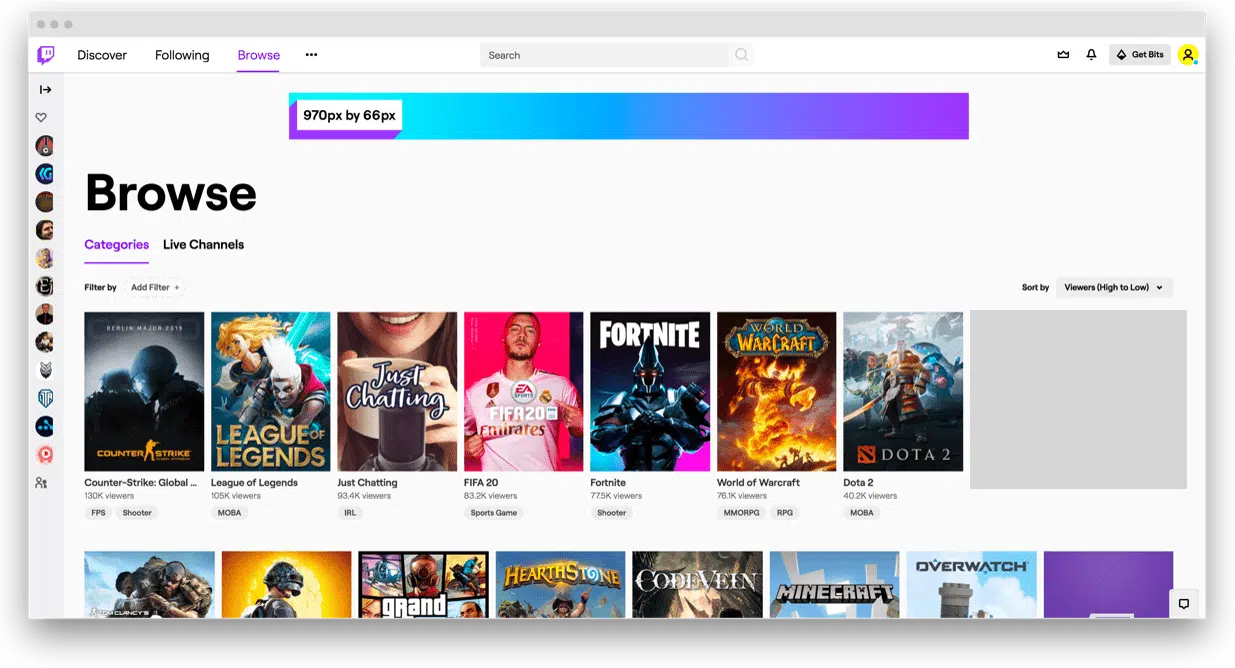 The Twitch Premium Video format allows you to incorporate video ads in live broadcasts on any device: desktop, mobile, tablets, connected TVs... They appear before or during a broadcast, are non-skippable and highly visible clickable ads. The specifications in this case are: 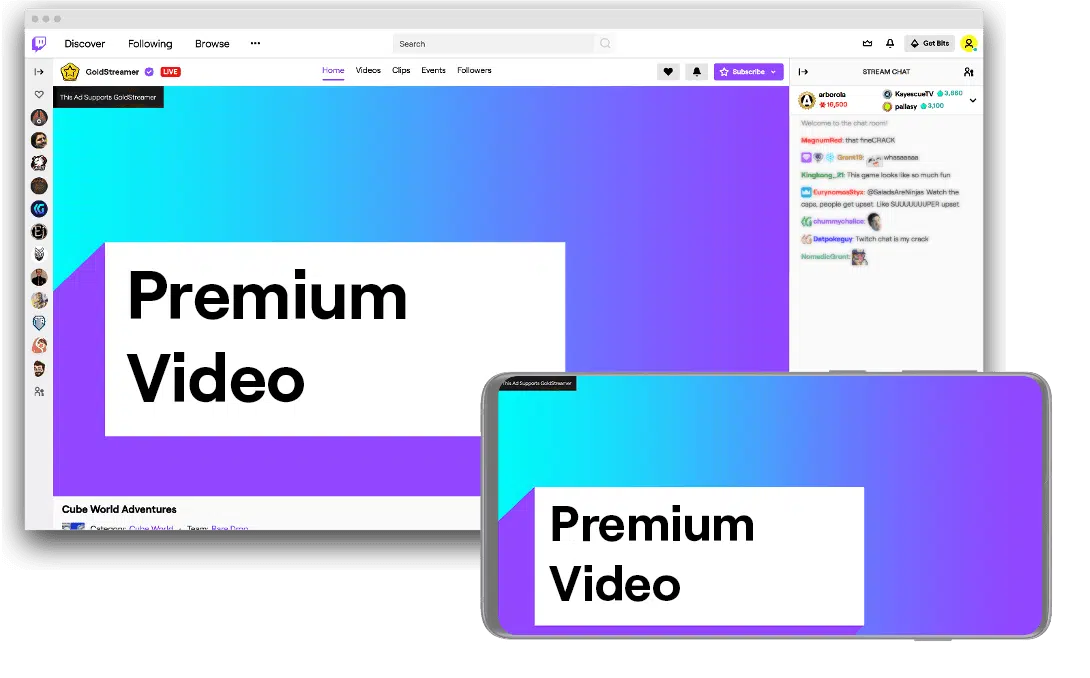 Get users to see your ad the moment they enter Twitch. These ads are sold per day and per geographic area and are priced on a daily basis. Specifications state: 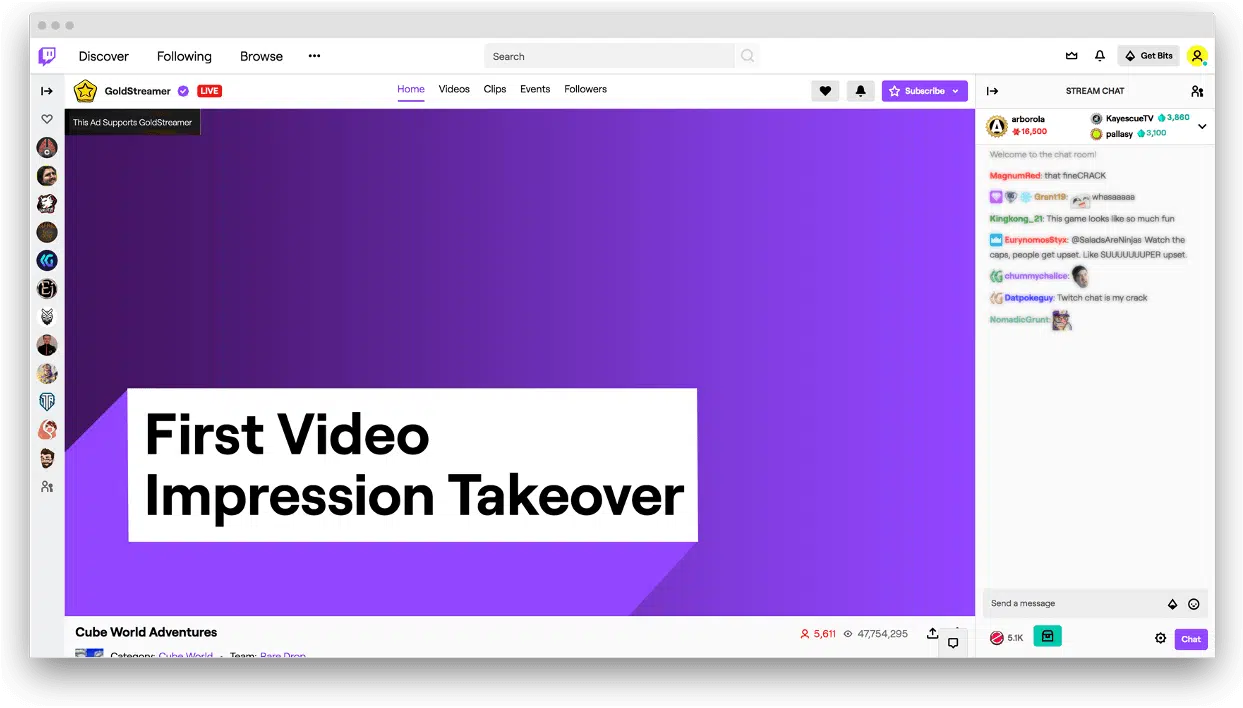 It is a platform in continuous growth and with a very high number of active users, which is why it is a very attractive channel for brands. Besides, Twitch users have a high interest and engagement with the content of the broadcasts.

There are other aspects that you should remember and take into account for your Twitch strategy:

How to migrate Universal Analytics data to GA4