How Rising Feminism in China is Shaping Brands’ Marketing Strategy

Feminist movements in China are developing in a quiet yet steady manner. During COVID-19,  chinese feminists and Key Opinion Leaders (KOLs) organized donations of sanitary pads for female medical workers fighting in the front line. Also, Chinese #MeToo movements on social media are also increasing, as its citizens are more proactively standing up against workplace sexual harassment despite censorship and supression from the counterpart. But how is rising feminism in China Shaping Brands’ Marketing Strategies?

An increasing number of well-educated women are entering the job market and getting independent income. Data shows that the labor force participation rate of Chinese females reaches 60%. 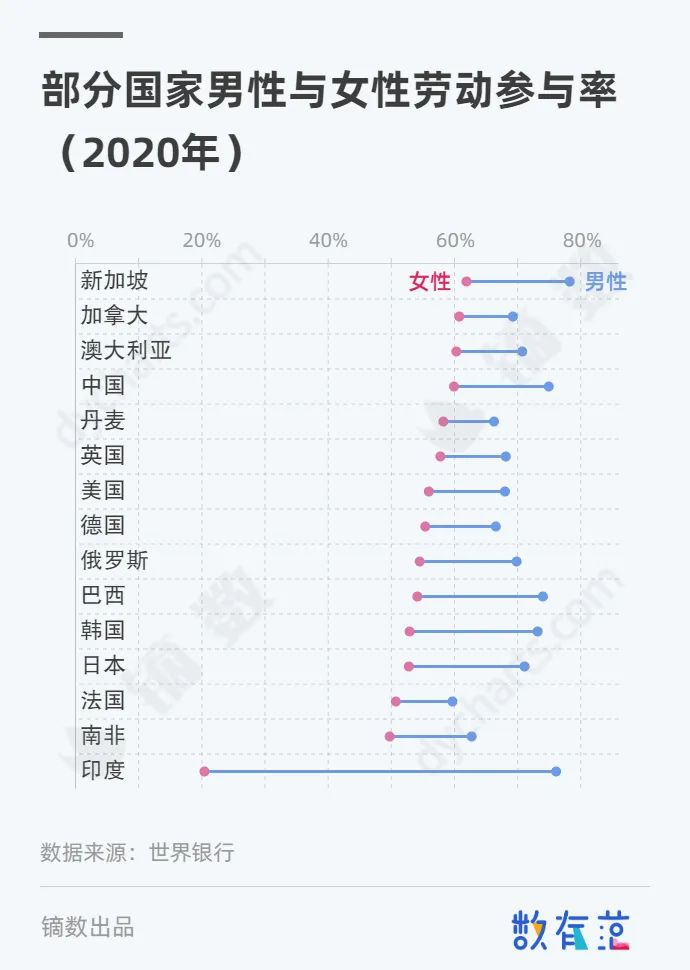 Economic independence brings along the power of speech. Women are gradually becoming the main force of consumption in the era of consumption upgrades and creating a brand new “Sheconomy”. Female consumer market reached 10 trillion RMB (approx. 1,3 trillion EUR) in 2020.

Women’s Day (妇女节) has received different names in China. The first innovation was Girl’s Day (女生节) or Goddess Day (女神节) as females are expected to stay young and attractive, and the word “妇女/Funv” / Women was considered to be “obsolete” and was associated with older women.

Soon Girl’s Day got boycotted by intellectual female students who argued the implicit “age shame” and unrealistic expectations on women. Marketers were quick to adapt by calling it Queen’s Festival (女王节) instead, gathering to the social admiration of strong, independent women.

How did the boycott happen?

7th March 2019 #TsinghuaUniversityGirl’sDayBanner# became Hot Search on Weibo and generated 96 million views and 24 thousand discussions. The banner was put in Tsinghua University in Beijing, one of the most prestigious universities in China. Females are not grudgingly showing their purchasing power to the brands that capture their admiration. According to Tmall, 80% of the top new brands that were founded in 2020 are focused on female’s consumption needs. Despite the shadow of a global pandemic, Queen’s Festival 2020 still achieved stronger sales performance than 2019.

More than 20k brands experienced 100% YoY growth, thanks to innovative marketing operations such as live-streaming. (data 2021 still pending to be released) Female entrepreneurship is also growing by leaps and bounds. While female bosses count for less than 10% in Fortune Global 500, on Tmall 40% of entrepreneurs are female. In the fashion/apparel industry, more than half of new brands were initiated by women.

Last year, the number of females who got a pair of boxing gloves doubled. 70% of Air Jordan buyers are girls, and 80% of suits/blazer buyers are women.

Do's and Don’ts for your brand’s marketing strategy

How to impress a group of increasing awakened independent Chinese females? The answer should start from real understanding, care and respect.

“A tribute to the Super You”, the biggest positive marketing action recently

Years ago, 3.8 Women’s Day was converted into the most important commercial event in the first half of the year, initiated by eCommerce giant Alibaba. It has become a special occasion for brands to strengthen their emotional connection with their female consumers. The official shopping festival usually lasts for 4 days, when brands and platforms tend to offer discounts and coupons as a “reward”. This year, Tmall united with 26 super brands to create a campaign called “A Tribute to the Super You”. From A to Z, 26 brands refined the strength and value of women and spoke together for women empowerment. 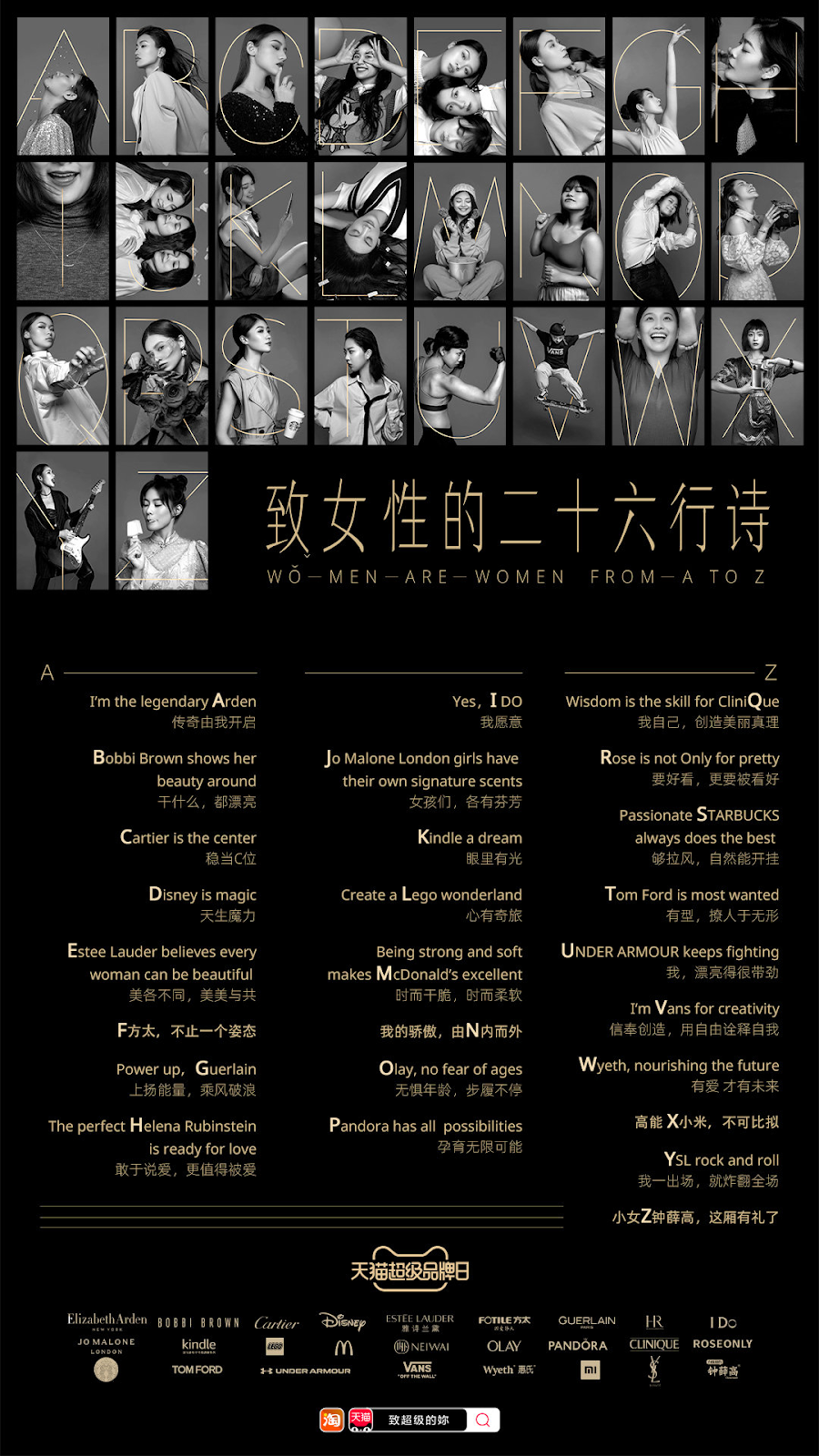 NEIWAI's, "No body is nobody"

Another success case took place this spring, NEIWAI published a new series of marketing campaigns which stroke a responsive chord with their direct consumers. All the slogans are worth savoring. People highly praised NEIWAI's brand concept as it jumped out of the traditional patriarchal view of women’s bodies and managed to resonate with women’s intimate needs: to be seen and valued as she is. 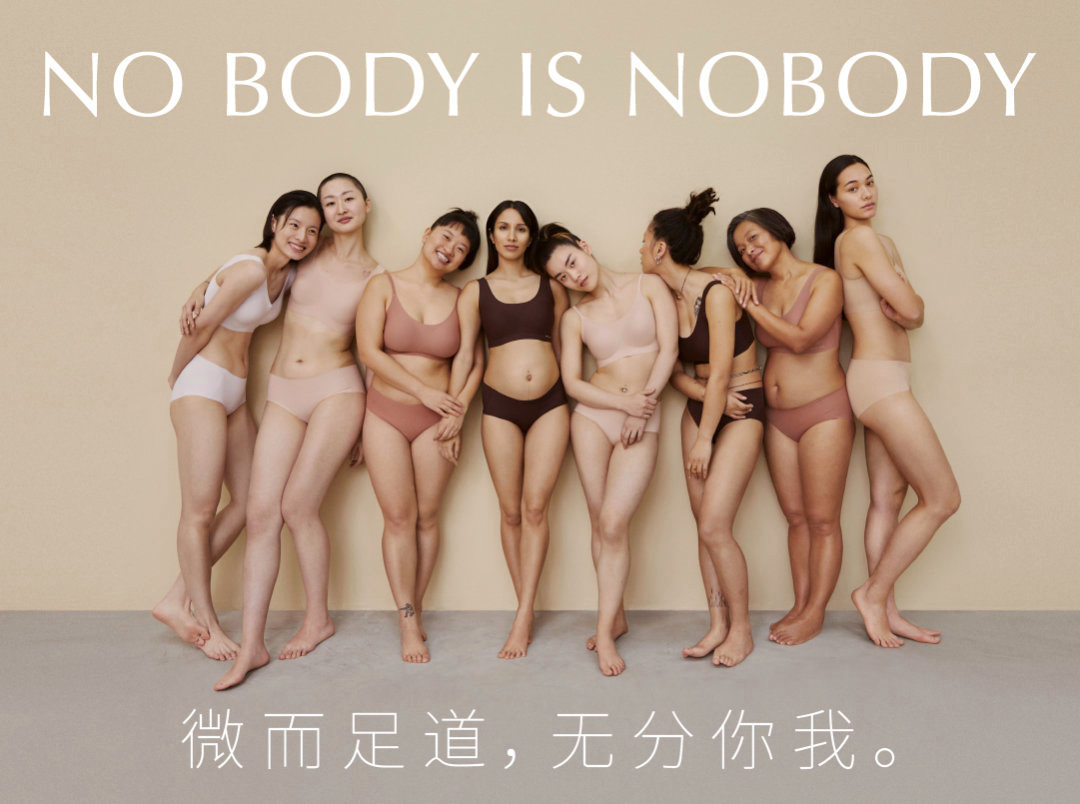 NEIWAI managed to keep the perfect balance between commercial actions and conceptual brand value. With sales growing up to 6 times per year, NEIWAI attracted a group of loyal customers with mid-high income who will re-purchase every 3 months.

There are negative examples as well

As a direct peer of NEIWAI, Ubras messed up in a recent campaign. They invited a famous stand-up comedian for a live-streaming sale session hoping to bring more topics and traffic. It turned out that Ubras got what they wanted although most comments were negative. The comedian posted on Weibo: “#My Workplace Life Vest# Ubra - an equipment that lets females succeed effortlessly in the workplace.” “I said I can sell everything, believe it or not.” The logic of this sentence is already inexplicable, moreover, he used the buzzword “躺赢” to express “effortlessly”, but the literal meaning of these words is “lie down and win”.

The discussion on social media platform Weibo quickly surpassed the implicit dark humor and focused on the underlying gender discrimination, as it implies females use gender advantage to succeed in work. Female consumers were triggered beyond indignation, not only at the bad humor but also at Ubra’s poor audit and management. Many say they will return their purchased items and will never buy again. Although the comedian quickly published an apology, the damage it caused to the brand is immeasurable. 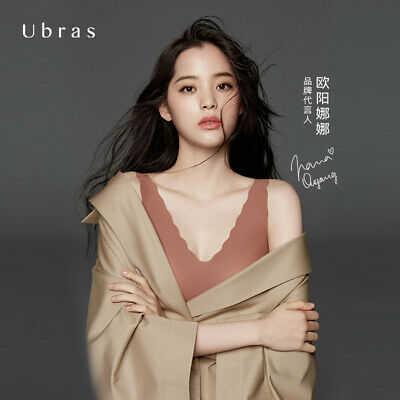 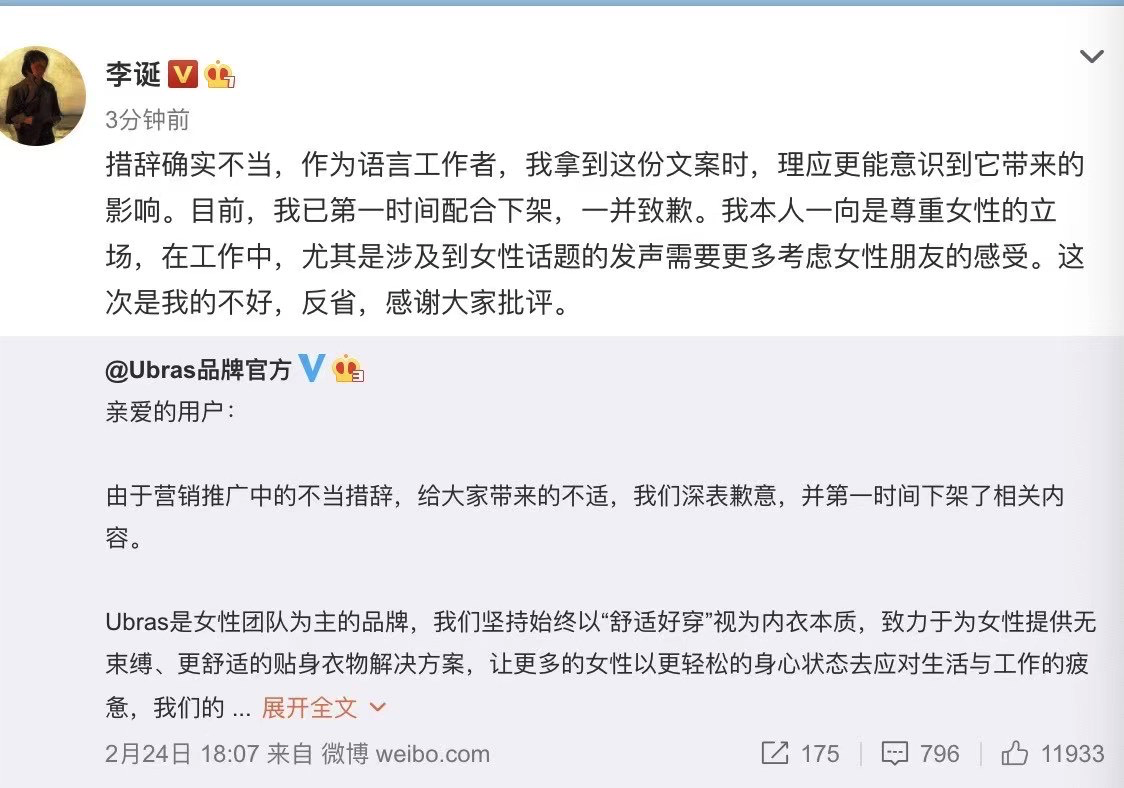 PurCotton also received infamy due to an advertisement on a short video platform. Named as “self-defense”, the ads tell us a story that a pretty girl who is followed by a stalker at night gets rid of the dangerous situation by using PurCotton makeup removal wipe and scares away the stalker with her face without makeup (represented by another male actor). 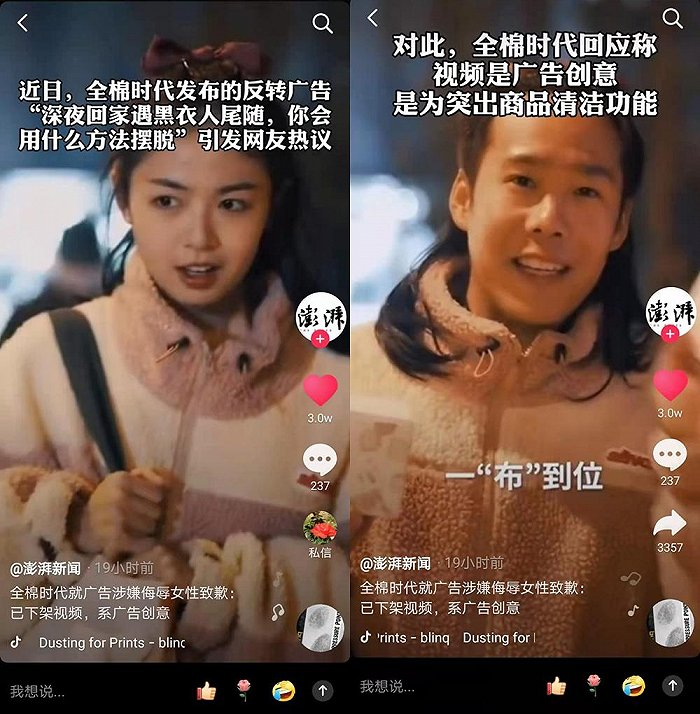 Short video ad is effective as it delivers the core value of the product within a few seconds. Brands and marketers work day and night to come up with creatives that can grab the customer’s eyes in 3 seconds. Although PurCotton argues that this creative is made to demonstrate the product’s cleansing capacity, it is truly disturbing to many consumers. Even in the short video era, brands should stay customer-centric and think from their perspective.

Need more advice and insights for your marketing strategy in China?

Reserve now a free consultation with our expert!

The keys to Google's Discovery Ads: focus on conversions

Snapchat Lenses: What it is and how it works